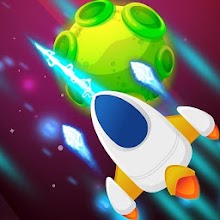 ❖After millions of years of living in peace the ...

***** How to play: *****
- Swipe your finger on the screen to control the direction of the bullet toward the meteorite.
- Skillfully avoiding the meteors darting towards the spacecraft. If the meteorite collided with the spacecraft. The combat ship will be damaged and unable to continue the game.
- In the process of fighting or collecting items from the earth to maximize combat efficiency. Items that will help: Double damage to bullets, Call for help, Double rewards for destroying meteors.
- When completing the game with the amount of gold received after destroying meteorite players can upgrade spacecraft, aircraft, guns to increase the fighting strength. Or players can choose more modern fighter aircraft to join the battle. After each part of play, there is always a part of the shop which is opened for players to upgrade.

***** Features of the game: *****
- A fast-paced colorful shooting action game.
- Endless game mode and challenge the most skilled pilot players.
- Games with specially designed visual sounds bring exciting playing inspiration to anyone most fastidious.
- As an addictive game after playing you will not be able to take your eyes off it.
- The game is completely free and constantly upgraded.