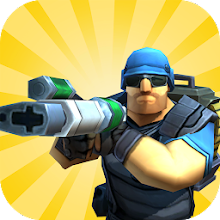 ★ The story: Prim was a professional soldier born at the ...

Prim was kidnapped in a trial battle on the virtual arena. This arena consists of AI robots programmed to attack anyone, including other robots. With the promise of being freed if you win all the other players. There is no rule in this virtual battlefield, Prim must try to become the last survivor to be able to win.

Without teammates, without support, not only had to fight alone, Prim had to defeat all the other AI machines before the toxic fog came. This arena is an abandoned army base, desert, ... Prim is only equipped with rudimentary equipment but always has the will to fight stubbornly. Each time he defeated the robot, Prim's morale increased, making him able to recover his stamina as well as fight more aggressively.

The player will control Prim's character, help him fight, survive and win all AI.

★ Play tips:
A player has the control to move easily and a bullet button. The bullet button will automatically target the nearest objects to you. So you adjust the bullet direction if you want to target a certain enemy!
Around the map with toxic fog, avoid it so you don't lose blood.