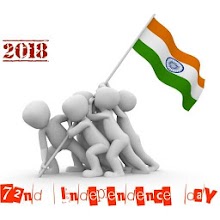 The date, 15th of August from 1947 in India has become a very important day in the Indian history.

It was the luckiest day of year 1947 when India became independent after lots of hard struggle and sacrifices of the Indian freedom fighters.

We won freedom after a hard struggle.


The National Flag of India is a horizontal , rectangular & tricolour saffron, white and green; with the Ashoka Chakra, a 24-spoke wheel, in navy blue at its centre.

It was adopted in its present form during a meeting of the Constituent Assembly held on 22 July 1947, when it became the official flag of the Dominion of India.

* A lots of wishes massage & status About Independence Day in Hindi , English , Bengali & Others language.

* Select a photo or take a picture using gallery.

* set a Indian flag picture according your 1st letter name

* Select frame which you want to add.

Note : In this application , It has 2 interstitial add .